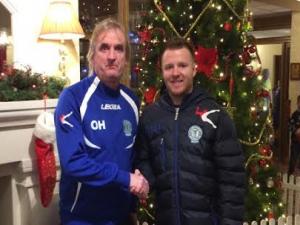 Finn Harps has confirmed that Jonny Bonner is set to rejoin the club ahead of the 2017 season.

It's the Buncrana man's second stint at Finn Park following a season at Wexford Youths.

The midfielder turned out for Derry City at underage level in 2008 but failed to cross into the senior side.

He made a return to the League of Ireland scene just three seasons ago after spending a number of years at at Illinois University.

“It’s important to get a player of Jonny’s talent signed. He’s a fine footballer and hopefully he will play a big part for us next season."

At the start of the 2015 season, the Buncrana man signed for Wexford Youths in the First Division and went on to play a part in ten of the first eleven league games of the season, before he left the club in July 2015 and rejoined Letterkenny Rovers.

However in January 2016, Johnny returned to Wexford Youths to sign on for the 2016 Premier Division campaign and was a regular in the team through the campaign.