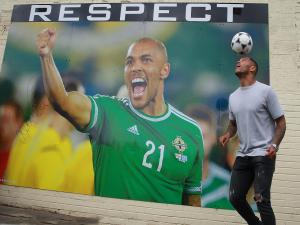 Northern Ireland Euro 2016 hero Josh Magennis has been immortalised in a new mural yards from his boyhood home in Bangor.

The Charlton striker returned to the Bloomfield estate on Wednesday as the Housing Executive artwork was unveiled at a special community event.

Pupils from Bloomfield Primary School and members of the Blooomfield Community Association, young people from the area and the Housing Executive, all combined to give a makover to an area blighted by anti-social behaviour.

The Housing Executive funded the 25ft x 10ft mural, and local children were treated when Josh signed postcards of the mural.

Fantastic reception for Bangor's Josh Magennis, who is immortalised on a mural at Bloomfield estate funded by @nihecommunity unveiled today. pic.twitter.com/d2uAueIHqX

Josh saying he's looking forward to being back home again at the start of next month for Northern Ireland's friendly international v New Zealand.

He said: “I would like to thank everyone in Bloomfield Estate and especially my family who were always supportive of my desire to be a footballer.

“The Housing Executive Mural is absolutely amazing and it was an honour to be able to play in the Euros and be part of the NI Team.   I come home as often as I can and it was great to see my former school teachers, friends and local school children today.

“The advice I gave to them was to follow your dream with hard work and tenacity, as nothing is impossible.  We have a great deal of talented young sports men and women in NI and I have no doubt we will have many more sporting heroes in the future.”

Isobelle Hamilton, from the Bloomfield Community Association said: “We are delighted to be able to unveil the mural to Bangor’s Josh Magennis, who played a crucial role in the Northern Ireland Football Team qualifying for their first major championship in 30 years.

“We listened closely to local residents as to how they wished to improve the appearance of the gable wall at the Bloomfield estate. It was agreed that in recognition of the achievements of Josh at Euro 2016, there could be no better tribute for the hometown hero.

“The Bloomfield estate is an extremely vibrant community and we wanted to promote the inclusive nature of the area, by showcasing the UEFA ‘RESPECT’ message which celebrates diversity both on and off the sporting field. This was a great suggestion made by the young people of the Bloomfield Estate.

“The mural is the culmination in strong community leadership and close partnership working to decide on the best use of the gable wall. It really was a unanimous choice to have Josh displayed on the wall.

“Bloomfield Community Association has established a vibrant community which is inclusive to all residents and the mural typifies the spirit of the area.”