That's What I Want 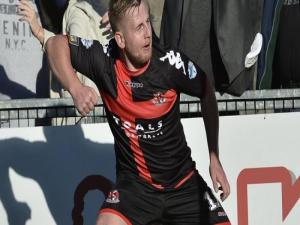 Key players have been ruled out of the Boxing Day derby between third-placed Cliftonville and leaders Crusaders at Solitude.

David Cushley is suspended for the Crues while Reds striker Daniel Hughes is also banned.

Cushley struck twice as the champions fought back from 3-0 down to score a dramatic 4-3 victory in October's north Belfast derby.

A home win would move Gerard Lyttle's team to within three points of the league summit.

In the other derby games; second-placed Linfield are at home to Glentoran, with the Blues aiming for their fifth festive derby victory in a row

Glens boss Gary Haveron hopes it'll be a different story in his first year in charge.

The Sky Blues' recent League Cup win against the Bannsiders was their first in the last six meetings.

The Ports haven't lost at Shamrock Park on Boxing Day for 49 years.

Meanwhile, new boss Niall Currie has been laughing off reports he is in fact a Lurgan man!

But on a day when that sort of thing matters, he's keen to set the record straight...

He hails from the heart of Portadown.

Mallards assistant manager Andy Crawford says this used to be the friendly derby, but times have changed since Ballinamallard moved up to the top flight...

The remaining holiday fixture is Carrick against Ards.