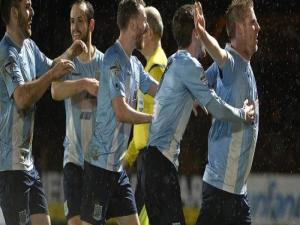 This weekend sees the final round of Danske Bank Premiership fixtures before the Boxing Day derbies.

There are no matches in the top flight on Saturday week, Christmas Eve.

Ex-Linfield manager David Jeffrey goes back to Windsor Park as Ballymena boss hoping for a third big win in a week.

They beat Glentoran at the Oval last Saturday, then Coleraine in the League Cup semi-finals on Tuesday night.

A victory on Saturday would move the Sky Blues to within three points of David Healy's men, currently second in the standings.

But Ballymena star Tony Kane says their only target at the moment is finishing in the top six.

Carrick, second from bottom, have a home game with third-placed Cliftonville.

Tiarnan McNicholl scored the winner against Glenavon mid-week, but he's on loan from the Reds and is set to be recalled to Solitude next month - so won't play in February's final with Ballymena.

Cliftonville go to Taylor's Avenue without both centre-backs. Skipper Jason McGuinness was sent off against Portadown last week and serves an automatic suspension, while Caoimhin Bonner is nursing a serious facial injury after being struck by Ports player Ken Oman, who's been hit with a six-match ban by the IFA.

Elsewhere, Colin Nixon's debut as Ards manager is against Coleraine at the Showgrounds.

Oran Kearney's side have now crashed to four consecutive defeats and Nixon is hoping to take advantage of their slump in form...

Niall Currie's first home game in charge of Portadown is a Mid-Ulster derby with Dungannon Swifts.

The Mallards are set to lose Adam Lecky, who leaves for Australia next month and will miss the rest of the season.

The big striker scored when the teams last met, clinching a 1-1 draw at the Oval in October.

He says the Fermanagh men are targeting a victory in the return match against the Glens, currently eighth - just two places above them.