Gray sees Red as Cliftonville slump into the bottom six 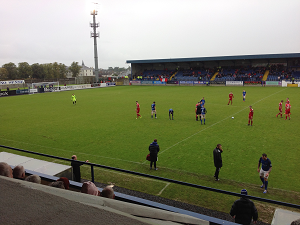 Cliftonville manager Barry Gray has slammed his players after they slumped to another defeat yesterday and into the bottom six of the Danske Bank Premiership.

The Reds crashed 3-1 to Glenavon at Mourneview Park, their fourth defeat in seven matches with only two wins.

Former Warrenpoint boss Gray emerged from the dressing room to say he's planning changes in the January transfer window, if he survives that long...

Andrew Mitchell scored again for Glenavon to make it seven goals for the season.

Man of the match Andy Hall and sub Marc Griffin then struck after the interval, with Joe Gormley getting the Reds' consolation goal before defender Garry Breen was sent off.

Glenavon are fourth in the table and coach Kris Lindsay says it's so far, so good in the new campaign...

Coleraine stay top after beating Carrick Rangers 3-0 at the Showgrounds, maintaining their 100 per cent record with a seventh win out of seven league games.

Darren McCauley netted twice for the third match in a row.

The Blues move up to second place, three points behind the Bannsiders, going above Crusaders who were held to a scoreless draw at Seaview by Ards.

Glentoran had a 3-1 victory away to David Jeffrey's Ballymena United.