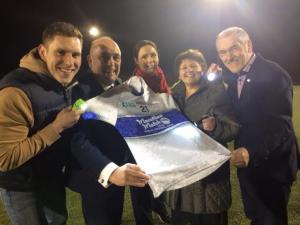 Proceeds go towards the Michaela Foundation and Cancer Focus NI

Gaelic footballers from across the country are set to take part in a world record attempt to play a 24-hour game!

The marathon match for charity is being staged at the Tyrone GAA centre in Garvaghey on the weekend of January 7th and 8th.

Proceeds go to Cancer Focus NI and the Michaela Foundation, set up in honour of Michaela McAreavey who was murdered on her honeymoon in Mauritius in 2011.

Michaela's husband John McAreavey, is now chair of the Foundation.

A former Down star, he's looking forward to playing his part.

Ex-Derry county player and cancer survivor Ronan Rocks is on one of the two teams.

The oldest player is 51-year-old Billy Drake, who's still turning out for his club St. Michael's, Magheralin.

The former Cliftonville soccer star says he's delighted to get a call-up.