Frampton to announce promoter 'within weeks' 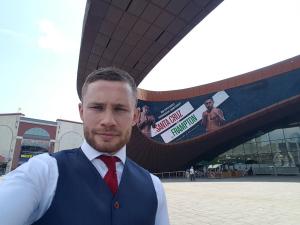 Carl Frampton says he hopes to announce a new promoter 'within weeks'.

The Belfast Boxer has recently split with Barry McGuigan and Cyclone promotions.

After linking up with new trainer Jamie Moore this week the Jackal's been speaking to QRadio.

"He's going to be looking after me now, getting me fit and ready to fight." Carl said.

"Hopefully I'll be in a position to announce a promoter in the next couple of weeks and I'm looking to fight before Christmas".

Frampton's homecoming fight against Mexico's Andres Gutierrez in Belfast was called off in July after the opponent slipped in a shower.

"I want to fight in Belfast. That's the place I want to fight more than any, I've done New York and Vegas but I love it here there's no atmosphere like it.

"I want to fight at Windsor Park, that's been a dream of mine and so if a promoter can deliver that for me they're half way to getting me."

"We're talking to a few of them it's just about putting all the offers together and seeing which one fits."