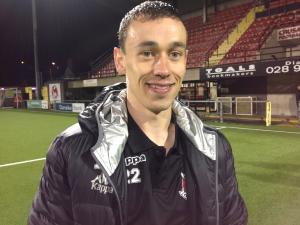 All six Danske Bank Premiership fixtures this weekend are being played tomorrow afternoon.

Second-placed Crusaders are at home to Ards.

The Crues are three points behind the Bannsiders after Tuesday's 2-1 victory against Linfield at Seaview.

Their spectacular goals from Jordan Forsythe and Paul Heatley have been proving a big hit online.

The former Carrick forward is now the Premiership's joint top scorer with six goals after a hat-trick against Ballinamallard last weekend then what turned out to be the winner on Tuesday.

While he was delighted to end a poor run of results against the Blues, Heatley says no-one at Seaview is resting on their laurels...

Ex Bangor player Forsythe insists the Crues will need to be on top form again to get the better of Colin Nixon's team...

Meanwhile, Blues boss David Healy says he wants an instant reaction to the Seaview setback when the defending champions host bottom club Ballinamallard - but he's not pressing the panic button just yet...

Kick-off for all the matches is three o'clock.

Finally, a nice touch from Linfield manager David Healy who has paid a hospital visit to a fan who took ill at last Saturday's Big Two derby no less than a Glentoran fan.

Glens boss Gary Haveron also visited lifelong supporter Allen Davidson, now said to be on the mend and set to take a keen interest in events at the Ballymena Showgrounds tomorrow.