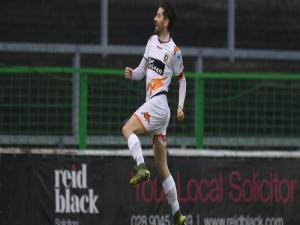 They drew with Glentoran at Seaview

Crusaders' lead at the top of the Danske Bank Premiership has been cut to five points after they were held to a 2-2 by Glentoran at Seaview.

Curtis Allen scored twice for the away team and the champions needed a late goal from former Glens midfielder Richard Clarke to get a point.

He was asked how it felt to help clinch the point against his old club.

Linfield moved back into second place and closed the gap on the Crues by beating Carrick 3-0, and it finished Ballymena 2 Portadown 0.