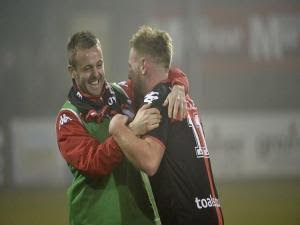 Close friends from Castlederg will be on opposite sides when Ballinamallard host Crusaders in the Danske Bank Premiership on Saturday.

Another Castlederg man, striker Adam Lecky, hit a hat-trick for the Fermanagh side in last week's 3-3 draw against Ards in Bangor.

Clarke scored a late equaliser for the league leaders against Glentoran at Seaview.

The 31-year-old is expecting another tough test this weekend, closer to home.

When Clarke left Glentoran almost three years ago, he was set to sign for the Mallards after talks with the then boss, Whitey Anderson.

However, the 31-year-old had a change of heart following a call from Crues manager Stephen Baxter.

Ex-Linfield player Crawford is aiming for an upset against the title favourites.