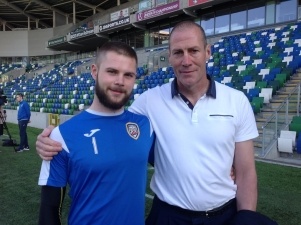 The stage is set for the biggest game of the season in local football.

Linfield and Coleraine meet at Windsor Park on Saturday in the final of the Tennent's Irish Cup (kick-off 2.30pm).

The Blues are hoping to complete the treble after clinching their first Danske Bank Premiership title in five years last week and winning the Toals County Antrim Shield earlier in the season.

The Bannsiders last won the Irish Cup in 2003, with Linfield's most recent success in 2012.

Eoin Bradley starred for the Lurgan Blues but is now back with Coleraine and is set for another cup final appearance this weekend.

Goalkeeper Chris Johns is another key player - he's just been named Bannsiders' player of the year.

But he's praising his teammates and backs them to continue their fine form in the final.

Linfield are on a 19-match unbeaten run, with 18 wins including one against the Bannsiders last month.

Will you be there? pic.twitter.com/q6hCGz1T5h

But Oran Kearney's men are the last team to beat them, back in January in Belfast.

The Showgrounds side, who have only lost twice in their last 20 fixtures, finished third in the league and qualified for Europe.

Blues boss Healy says it promises to be a great final.

Linfield have the title in the bag, but Healy rejects any suggestion it won't mean as much to win the cup.

David Healy is the NIFWA Manager of the Month for April. @OfficialBlues won 6 matches to claim the Gibson Cup and reach the Irish Cup final. pic.twitter.com/BWSNY3xl5B

Former Blues player Kearney says he has no problem with the showpiece game being staged at their opponents' home ground.

Original referee Raymond Hetherington is unable to officiate at the final due to illness.
He will be replaced by Keith Kennedy.

It's a controversial choice for some, but we asked Kearney if it's irrelevant who the man in the middle is?