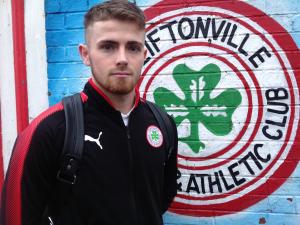 Cliftonville striker Rory Donnelly is set to miss the first six weeks of the season after being suspended by the Irish FA.

He was handed a three-month ban on Wednesday night, but half the sanction has been suspended until the end of the season.

Donnelly's been disciplined for sharing inside team information before Cliftonville's last game of the Danske Bank Premiership against Linfield.

The Reds fielded a weakened side ahead of the Irish Cup final but still won and the club says there's no suggestion of suspicious betting on the match.

Donnelly didn't play against the Blues.

Chairman Gerard Lawlor has told Q Radio Cliftonville will consider the IFA decision when it receives official notification and could consult with legal representatives over lodging an appeal about the length of the suspension.

This is the IFA statement issued on Wednesday night:

"The Irish FA Discipline Committee this evening held a sanction only hearing involving Rory Donnelly of Cliftonville FC. Mr Donnelly was charged with a breach of Article 17 of the Articles of Association as evidenced by a breach of Regulations 45 and 46(c) of the IFA Football Regulations which state:

45. All persons bound by IFA’s rules and regulations must refrain from any behaviour that damages or could damage the integrity of matches and competitions and must cooperate fully with the IFA at all times in its efforts to combat such behaviour.

46. The integrity of matches and competitions is violated, for example, by anyone:

C) who uses or provides others with information which is not publicly available, which is obtained through his position in football, and damages or could damage the integrity of a match or competition.

"The charge was accepted therefore the Discipline Committee considered submissions made by the club in mitigation, both verbally and in writing. Taking into account the actions of the club but also the potential seriousness of the incident, the Committee made the decision to suspend Mr Donnelly for a period of three months from Monday, 30 July 2018 with half of the sanction suspended until the end of the 2018/19 season. The Club have a right of appeal under Article 14 of the Articles of Association."

Crusaders play in the second qualifying round of the Europa League on Thursday night.

After dropping down from the Champions League qualifiers, Stephen Baxter's men face Olimpija Ljubljana in a first leg tie in Slovenia.

Linfield Ladies have beaten closest rivals Cliftonville 2-1 to move nine points clear at the top of the Women's Premiership.

Sion Swifts had a 4-2 victory over Crusaders and Glentoran beat Derry City 5-0.