Amber Army on march back to Premiership: Feeney says he won't walk away from Ards 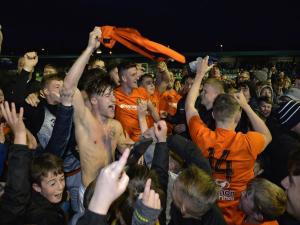 Carrick Rangers are back in the Danske Bank Premiership.

They beat Ards 2-1 in last night's promotion/relegation play-off second leg in Bangor and win 3-1 on aggregate.

Mark Surgenor and Ryan Strain scored the goals with Johnny Taylor pulling one back for the home side.

Carrick clinched victory despite being reduced to 10 men at the start of the second half when defender Chris Rodgers was sent off.

🎥 Warren Feeney wants to stay @ArdsFC1900 manager after relegation but says that’s down to the club... pic.twitter.com/qO300uon1a

In transfer news, defender Chris Hegarty has moved from Dungannon Swifts to Crusaders on a three-year contract.