Can I Get It 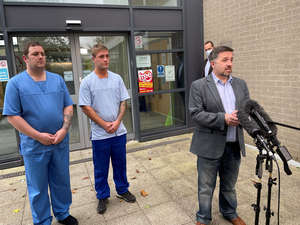 Robin Swann at the Ulster Hospital

Northern Ireland’s health service needs additional funding so it does not have to continually call for military assistance during times of crisis, Robin Swann has warned.

The Health Minister was speaking as he met Army medics who have completed their latest deployment to help relieve pressure on staff at the Ulster Hospital.

He said the Army should not be seen as a “permanent fixture” in Northern Ireland’s hospitals.

It is the third time troops have come to the region during the Covid crisis following requests from the Department of Health under an arrangement known as Maca (Military Aid to Civilian Authorities).

On this occasion, 80 medics and 30 support staff were deployed. Twenty medics were sent to the Ulster Hospital, with the rest deployed at the City and Antrim Area Hospitals.

Of the medics sent to work on frontline services at the Ulster Hospital, half were under the age of 21.

Mr Swann said health service staff were grateful for the support received from the Army, and also indicated that he might have to make further requests for assistance.

He said: “One of the things we have been able to do throughout the pandemic is to deploy help from our military.

“We have deployed now three Macas in Northern Ireland and our medics are now going home for the third time.

“They have been working across our hospitals for the past number of weeks and have fitted in seamlessly to support our staff on wards but also to support our patients through the past three weeks as well.

He added: “I don’t want to pre-empt anything, but what I think we have now is a system that works in regards to we know what help is available, we know how to go about it, and I think one of the main benefits now in Northern Ireland is there is no opposition to it being asked for or received because we know it is needed.

“In the first deployment they came when we were on our knees across a lot of the health service.

“The second time was through our mass vaccination centres, and the third time has been to give that additional help and that morale boost to our staff.

“I have been talking to some of the staff from the trust and they have been saying that this has been a great uplift.

“The medics themselves have fitted in seamlessly; talking to them it has been a different challenge to them but a rewarding challenge.” 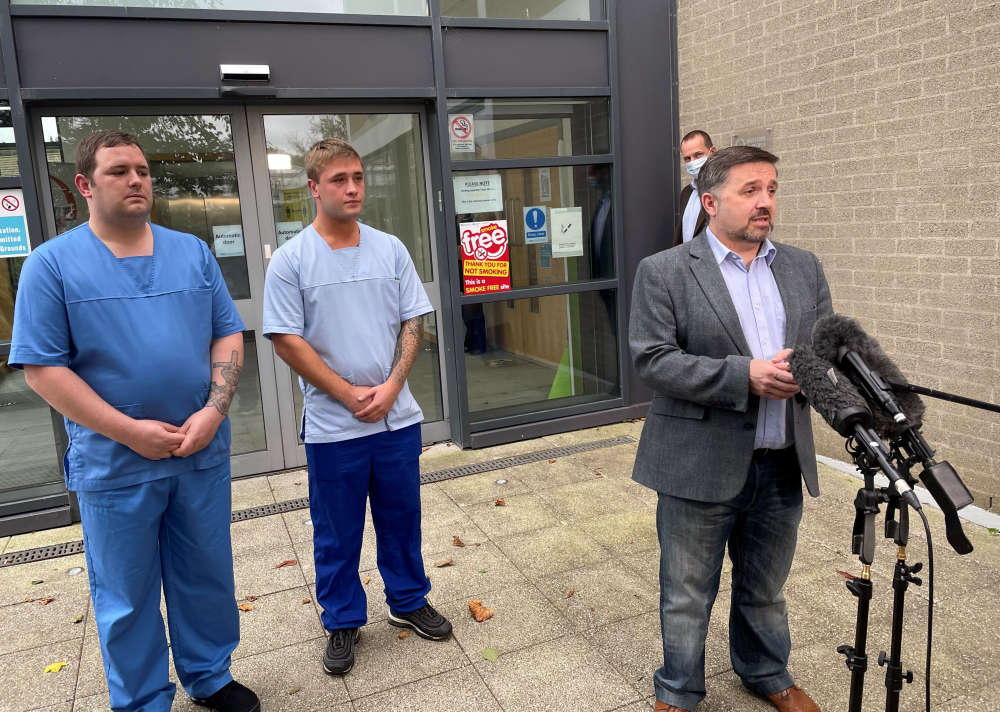 Corporal Lewis Maxwell (left) and Private Benjamin Brown with Health Minister Robin Swann at the Ulster Hospital in Dundonald, as the the latest deployment of military staff to Northern Ireland hospitals comes to an end

Mr Swann said that although the health service is currently facing up to the challenges of winter pressures and Covid, there is a time limit on how long the Army medics can provide assistance.

“When we receive the military assistance, it is always time-bound,” he said. “If, at a future point, we have to ask again, we will go through the same process again.

“One of the challenges we saw around this request as well was that we didn’t know how Afghanistan was going to work out, so there is always other things across the world that have to be taken into consideration by NIO, Ministry of Defence, as to how they respond to our requests.

“But we can’t see them as a permanent fixture. One of the things that the Northern Ireland Executive has to do is actually step up and invest in our health service and invest in its workforce.

“I would rather invest in our own workforce so that we didn’t have to go to those steps.”

A senior nurse in the Ulster Hospital said there are concerns among staff about the situation coming over the winter months, now that the Army assistance has ended.

Roisin Devlin, lead nurse in the emergency department, said: “The pressures have been extreme right across the system, both in and out of hospital.

“Staff have been working extremely hard and looking after really ill patients coming in to the hospital through the emergency department and also referral from GPs.

“It has been a huge relief for staff on the wards to have the guys come in with their different set of skills and to be able to take that little bit of extra time to speak to the patients, but also coming in with their attitude of ‘How can we help?’ – it has made a massive difference on the wards.

“The health service has been under pressure for a significant period of time and, as usual, staff will step up and they will do the very best that they can do.

“But there is no doubt that there is concern coming into the winter with increasing numbers and the pressure on the system with Covid that we are unsure what the winter is going to be, but we do know that it is going to be exceptionally challenging.”