Life Is A Flower

Forklift stolen in 2020 recovered by police after ‘exhaustive’ inquiry 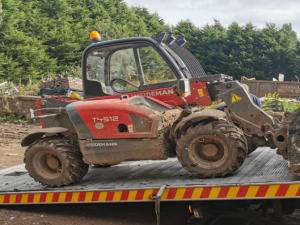 A man has been arrested as part of a police investigation into the theft of a forklift telehandler in 2020.

Sergeant Grant Behan from the PSNI said that a search took place on Tuesday afternoon at a commercial premises on the Crumlin Road in Belfast.

The forklift truck, stolen in April 2020 from Glenarm in Co Antrim, was recovered by police officers.

A 47-year-old man was arrested on suspicion of handling stolen goods and for possessing a prohibited weapon.

He remains in police custody.

“I am very pleased to have been able to recover this high value item after a long and exhaustive investigation,” Sgt Behan said.

This high value piece of stolen equipment was recovered today following a search at commercial premises at Crumlin Road, north Belfast. A 47 year old man has been arrested and is currently assisting us with our enquiries. pic.twitter.com/XDBmfCNNxW