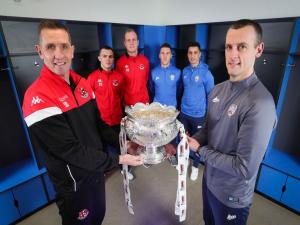 It's a big weekend for football here with crunch games in the Danske Bank Premiership, the BetMcLean League Cup final and Derry City kicking off their League of Ireland season - away to Dundalk.

Friday night sees four Premiership fixtures with the Big Two both in action.

Leaders by four points Linfield are on the road to struggling Ballymena United.

Dungannon Swifts welcome Larne and there's a massive match at the foot of the table with the bottom two meeting at Milltown - Warrenpoint Town against basement club Institute.

Also on Valentine's Day, Derry City launch their League of Ireland campaign with the toughest fixture of all - defending champions Dundalk at Oriel Park.

Topping the weekend bill is the BetMcLean League Cup final on Saturday night at Windsor Park where Crusaders take on Coleraine.

The 23yo has shaken off a knee injury & is targeting a place in next week's @Bet_McLean #LeagueCup final v @ColeraineFC keen to go head-to-head with old @derrycityfc mate @ben_doherty16!

Rory’s on air on the hour pic.twitter.com/ePxWNROv9H