I Wanna Be The Only One 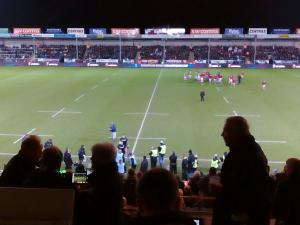 Ulster's chances of making the quarter-finals of the European Champions Cup are all but gone.

They lost 31-19 to Exeter Chiefs at Sandy Park yesterday, with the home side grabbing a bonus point.

Exeter won the day with forward power, who had too much in the tank for the Ulstermen- Les Kiss' men are now more than likely to go out at the pool stages of Europe for the third season in a row.

It was they who started stronger though and they were rewarded for their positivity when Stuart McCloskey broke through on first phase ball before offloading to Sean Reidy who finished off the move.

While the start was exactly what they wanted, it wasn't as much as the visitors should have had as they continued to put plenty of pressure on the Exeter defence but they couldn't break over again.

Instead the Chiefs slowly worked their way back into it and they levelled midway through the half when Michele Campagnaro found a small gap in the defence and powered over for the try.

The hosts then took the lead for the first time when number eight Thomas Waldrom did what he does best and picked up from the back of a scrum and thundered his way over from close range.

Despite the Chiefs being dominant at this stage, it would be all square at the break as Charles Piutau took the ball out wide and his sidestep fooled Jack Nowell completely, allowing the wing score.

But after the break it was nothing short of one way traffic as the Chiefs camped themselves in the Ulster 22 for the first ten minutes of the second half, and eventually they got the deserved score, Waldrom again smashing over.

Almost as soon as they had left the Ulster half they were back in it and back over the try line again, Campagnaro again the scorer in the corner, but it was poor defending that let him in as Reidy and Piutau missed key tackles.

With the bonus point secured the Chiefs took their foot off the pedal slightly and as a result Ulster got some momentum going and they did get a third try through Piutau, who caught a great crossfield kick from Jackson to score in the corner.

But that was as good as it got for Ulster, and their task was made near impossible as Jackson conceded a penalty try ten minutes from time for a deliberate knock on near the line, putting the gap out to 12.

Try as they might towards the end the Ulstermen could not find that fourth try that would give them two points to go home with, and as a result their European adventure is all but over for another year.

Thanks to the large contingent of noisy Ulster fans at Sandy Park this evening. An entertaining game but not the result we wanted!