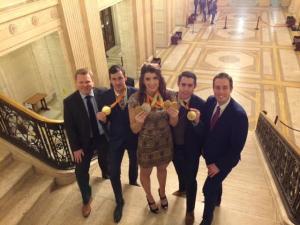 Northern Ireland competitors from the Rio Olympic and Paralympic Games have been honoured with a reception at Stormont.

Smyth says it's fantastic to get the recognition.

The evening was hosted by Sports Minister Paul Givan.

Delighted to host our sporting athletes at Stormont in recognition of their sporting success in Rio last summer. pic.twitter.com/g0tUR0LJfY

Bethany Firth says it's brilliant to be united across different sports.

Michael McKillop says he's proud to be recognised alongside his fellow athletes.