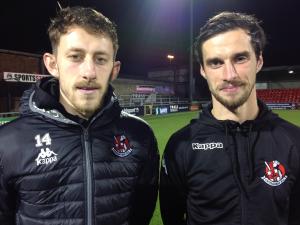 Coleraine crashed to their first domestic defeat of the season last night, losing 3-2 to Crusaders in a League Cup last 16 cracker at Seaview.

Man of the match Jordan Forsythe struck twice for the Crues.

Declan Caddell grabbed the 75th-minute winner and said the victory was a boost after last weekend's 3-2 league loss at home to Glenavon.

All over. @CrusadersFC 3 @ColeraineFC 2. Through to last 8. Well done lads 🔴⚫

Bannsiders boss Oran Kearney was disappointed with his team's defending.

Ards also made it through to the quarter-finals, beating Glenavon 4-0 in Bangor with a double for former Linfield forward Jonny Frazer.

What a performance from the boys tonight, special mention to Jonah, Ben and Josh 👏🏼 #outstanding

Both teams made a number of changes from their usual line-ups.

A hugely disappointing https://t.co/lZPpgJ020e journey home to those fans who made the trip this evening.