I Am I Feel 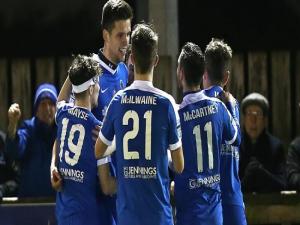 There's a crunch match at the bottom of the Danske Bank Premiership on Friday night.

A win would move the Mallards eight points clear of their rivals who currently sit in the relegation play-off place.

The Fermanagh side will be without striker Adam Lecky for the rest of the season as he's set to spend a year in Australia.

Carrick have made their eighth signing of the January transfer window, bringing in former Crusaders winger Eamon McAllister from intermediate club Crewe United.

With 14 games remaining in the league campaign, the top two have potentially tough away matches on Saturday.

Leaders Crusaders face Glentoran at the Oval while second-placed Linfield go to Glenavon.

Allen previously turned down a chance to move to the Crues, recently signing a new three-year deal at the Oval after talks with manager Gary Haveron...

He says it was an easy decision.

Linfield are seven points off the pace and midfielder Stephen Lowry admits only a victory will do in Lurgan.

Also on Saturday, third-placed Cliftonville are at home to Ards.

And Coleraine could move above Ballymena into fourth in the standings.

That's if the resurgent Bannsiders win against basement club Portadown at Ballycastle Road and the Sky Blues fail to beat visiting Dungannon Swifts.

All the Saturday fixtures kick-off at 3pm.