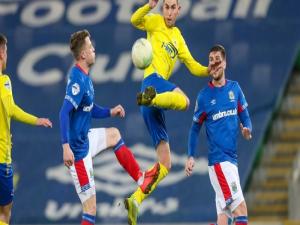 Linfield are back on top of the Danske Bank Premiership after a 2-1 win against Dungannon Swifts.

Andy Waterworth struck twice as the Blues fought back from a goal down to clinch victory at Windsor Park on Tuesday night.

The manager praised his players after the match...

In the other game, 10-man Cliftonville beat Carrick Rangers 3-1 at Solitude to register their first league win in four games..

Conor McMenamin hit a hat-trick for the Reds who had midfielder Liam Bagnall sent off in the first half.