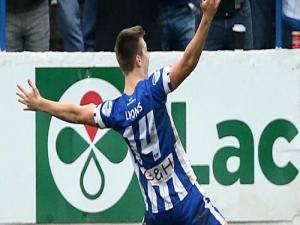 Brad Lyons headed in the first goal for the Bannsiders. Image credit: NIFL

Coleraine extended their lead at the top of Danske Bank Premiership on a dramatic Saturday when they grabbed a controversial late winner against Linfield and saw midfielder Brad Lyons stretchered off with a serious injury.

The Blues claimed Jamie McGonigle's strike to make the final score at the Showgrounds 2-1 hadn't crossed the line and manager David Healy was sent to the stand for his protests.

Lyons headed the first goal for the Stripes but later had both cheek bones fractured in a collision with a Linfield player.

Both terms immediately called for medical attention on the pitch - here's the Bannsiders boss and ex-Blues midfielder Oran Kearney.

Kearney's men are unbeaten in their first 10 league games, winning nine of them.

But skipper Ogilby says it's way too early for title talk.

The Blues did not take part in the post-match media interviews.

Lads we're brilliant from start to finish today, great result, don't like the doubts about the goal. Clearly over the line for me⚽️🔵⚪️🤙🙈 pic.twitter.com/brUZzKlQyr

Coleraine are now seven points clear of Linfield and five ahead of Glenavon who moved into second place by beating Crusaders 3-2 at Seaview.

Also on Saturday, Cliftonville had a 2-0 victory against Glentoran, with Rory Donnelly grabbing both goals at the Oval.

Ballymena beat visiting Ards 6-3 and Carrick were 2-1 winners at home to Dungannon.

Meanwhile, Ballinamallard manager Gavin Dykes has said he's considering his future at the club after Friday night's 2-1 defeat at Warrenpoint.

It leaves the Fermanagh men rooted to the bottom of the table with just one point from their 10 matches.

A pensive Gavin Dykes after last nights match. Thanks to @qnewsdesk for the coverage! https://t.co/WmdEObs58T