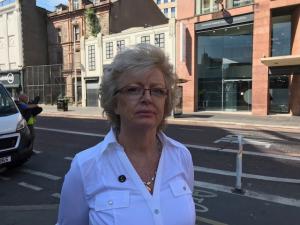 Internal concerns over policing procedures were raised ahead of a force’s decision to prosecute Birmingham pub bombings campaigner Julie Hambleton for allegedly breaching Covid lockdown rules, a court has heard.

Ms Hambleton has gone on trial at Birmingham Magistrates’ Court alongside three other men, accused of attending a gathering “of more than two people” during an event to commemorate the blasts’ victims.

All four attended a motor rally through Birmingham, on November 21 last year, to mark the 46th anniversary of the double IRA blasts, which claimed 21 lives, including Miss Hambleton’s older sister, Maxine.

Ms Hambleton, 58, who leads the Justice 2 the 21 (J421) group, and her co-defendants deny any wrongdoing at the event, held amid the second national lockdown.

The 58-year-old of Crossway Lane; Kevin Gormley, 53, of Beacon Road; Michael Lutwyche, 54, of Hayes Grove; and John Porter of Corner Way, 59, all of Birmingham, are being prosecuted after refusing to pay fixed penalty notices.

It is alleged by prosecutors that there was a “clear and deliberate” breach of the rules after between 15 and 25 protesters, including all four defendants, got out of their vehicles at the end of the rally, outside West Midlands Police’s Birmingham headquarters, Lloyd House. 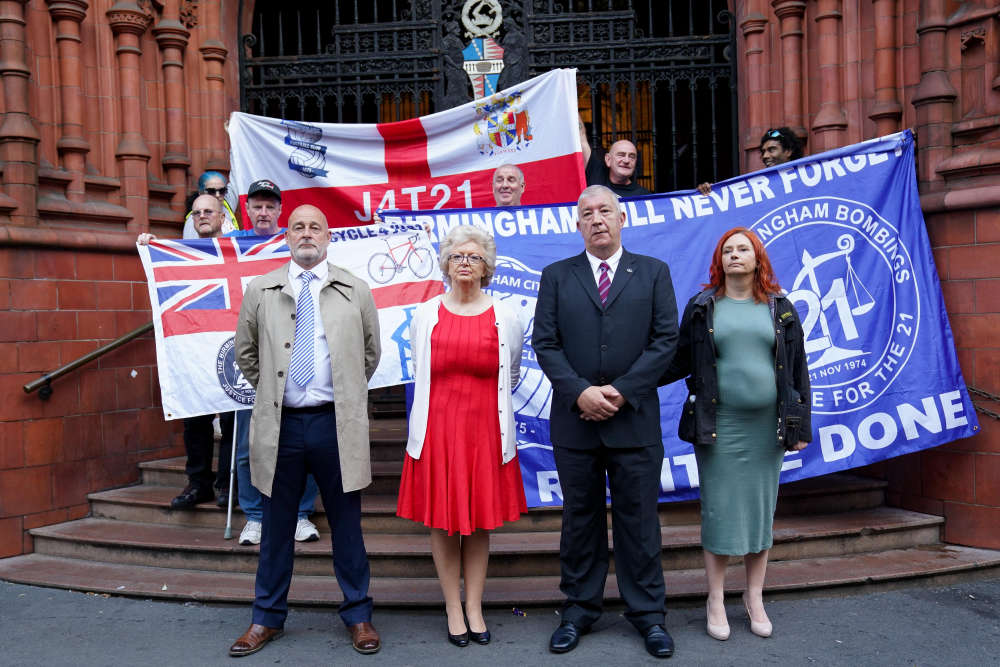 Pictured - Julie Hambleton (second right) arriving at Birmingham Magistrates' Court where she is appearing for an alleged Covid-19 breach. Miss Hambleton, who co-founded Justice 4 the 21, campaigning on behalf of the victims of the 1974 IRA Birmingham pub bombings, is in court for an alleged breach of Covid-19 lockdown rules, in connection with a memorial car rally held on the anniversary of the bombings

Opening the case on Tuesday, Tom Parker, for the prosecution, said: “When they got to Lloyd House, a significant number of people exited their vehicles and congregated outside Lloyd House including all four defendants.

“They did so knowing they weren’t permitted to do so and contrary to what they had (previously) said to police.”

The trial has heard evidence that West Midlands Police was aware of the rally, had officers present and had at the time been following a nation-wide approach to policing the lockdown, namely the four Es; engage, explain, encourage and enforce.

Earlier on the day of the protest, all four defendants had got out their vehicles in Bromsgrove Street, where there is a city mural to the victims, where Ms Hambleton told a police officer they were “just going to take a photo”.

Chief Inspector Richard Cox, who was on the scene, estimated there were between “40 and 60” people gathered in the street.

On the day, he told Ms Hambleton: “The number of people gathering outside of vehicles is a concern so if we could get people back in vehicles, that would be great.”

Ms Hambleton replied: “Ok, I will do that.”

Mr Cox later radioed his senior “silver” commander on duty that day, Chief Superintendent Andy Parsons, telling him “it is a really sensitive issue, we haven’t got many staff here, it doesn’t feel appropriate for us to intervene at the moment, before we understand more about it”.

He added that “Chief Superintendent Parsons agreed and said that was a proportionate response”.

Asked by the prosecutor if any “formal order to disperse” was issued to the group, Mr Cox replied: “No”, adding: “I didn’t think that would be well received, with the day (of the anniversary).”

He was asked by Philip Rule, representing all four defendants, “You didn’t follow your four Es approach, in dealing with the J421 group?”

Mr Cox said: “No, but I had spoken to the relevant parties in Bromsgrove Street.” 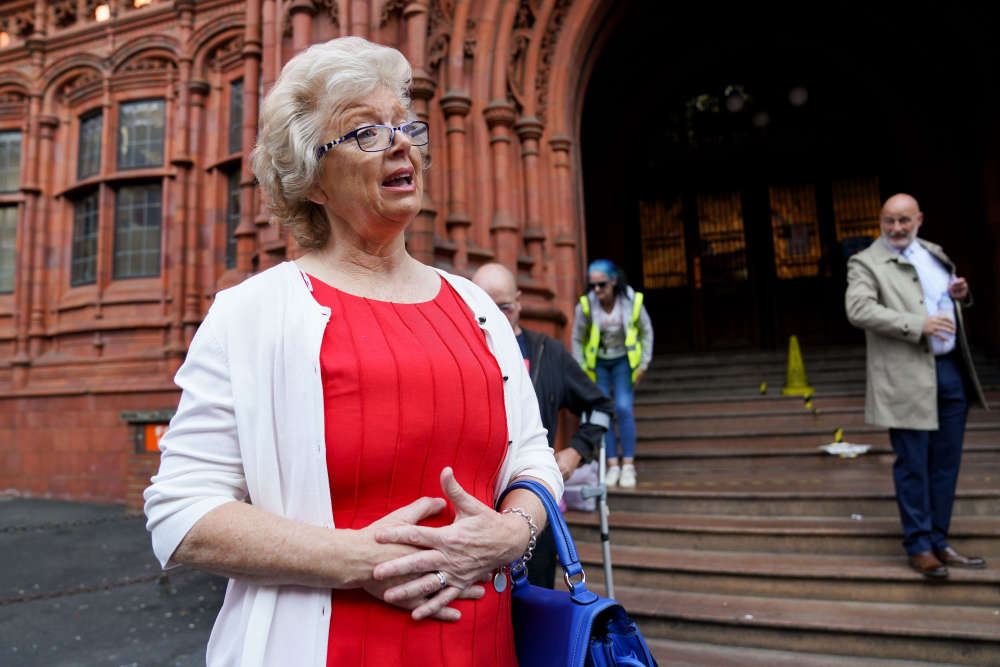 Mr Rule then pointed out body worn video evidence showed the chief inspector had only spoken to Ms Hambleton and Mr Gormley, asking them to return to their vehicles, and Mr Porter – although he was given “no direction to leave”.

The chief inspector replied: “I encouraged the organiser, Mr Gormley – and a very prominent person within campaign group, Ms Hambleton – to return to their vehicles from a safety viewpoint.”

In his evidence, Mr Parsons, who had overall responsibility for policing of the rally, said he carried out a post-incident review of body-worn footage and other evidence to assess whether any enforcement action would be needed.

In the course of that review a colleague, Sergeant Lizzie Lewandowski, raised the issue about the “lack of challenge of the four Es” by Mr Cox on the ground to the defendants, in an email dated November 30, 2020.

That review also pointed out that none of those subsequently prosecuted had been spoken to directly by police outside Lloyd House.

Turning to the November 30 email, the defence lawyer asked Mr Cox: “In the email, you again address the four Es process, in light of the sergeant having criticised your conduct in so far as it created an issue over the four Es being followed?”

Mr Cox replied: “I took the decision that it was not appropriate to comment on the internal West Midlands Police four Es process to the group, my rationale being I didn’t believe it would be well received.”

It also emerged in court that at the time, Mr Cox wrongly thought the four Es policy “was a West Midlands Police approach”, when in fact it was national guidance from the National Police Chiefs’ Council (NPCC).

Mr Cox told the court that “the four Es is not a legally binding approach” but was “best practice” adding that the point he was making in response to the November 30 email “was the fact we didn’t say the words; engage, explain, encourage, doesn’t mean our actions weren’t appropriate or lawful”.

At one point, District Judge Shamim Qureshi addressed Mr Cox and contrasted the force’s decision not to fine any of the thousands who attended Canon Hill Park in breach of the Rule of Six in March 2021, with those on trial.

The officer of 26 years’ experience replied: “A decision was made above me that it was appropriate, proportionate and necessary.” 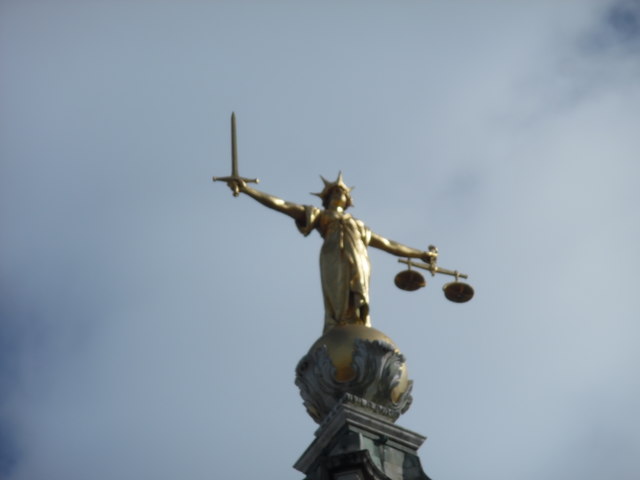