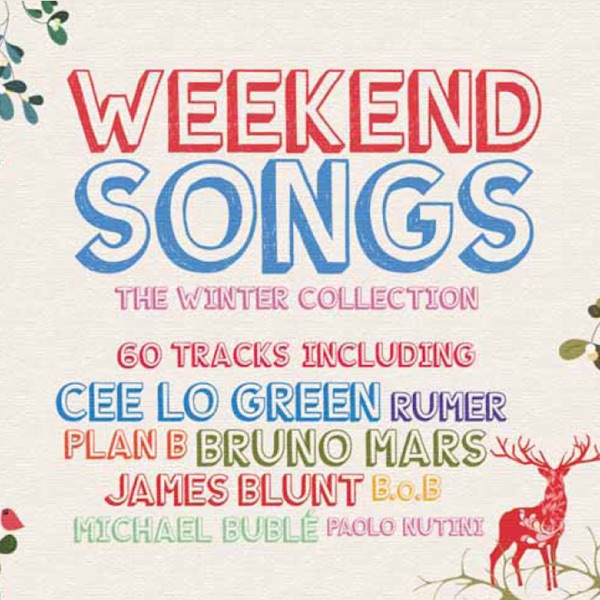 Killing of Ashling Murphy has united Ireland in 'solidarity and revulsion' 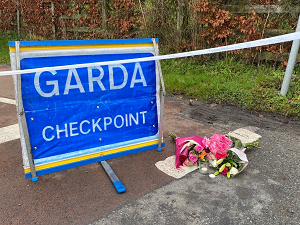 The murder of 23-year-old teacher Ashling Murphy has “united the nation in solidarity and revulsion”, the Irish premier has said.

His comments came as Ireland’s deputy premier said society has to face up to an “epidemic of violence against women”, with senior politicians promising that the entire resources of the Irish police are available to bring the killer to justice.

Gardai are continuing the hunt for the killer of the young teacher, who was found dead on Wednesday after going for a run on the banks of the Grand Canal in Tullamore, Co Offaly.

Taoiseach Micheal Martin said today: “It’s very poignant and a very sad moment in our nation’s affairs when a young talented musician had her life violently taken a few days ago, and our hearts and our minds go out to the Murphy family, to her community, to her family and friends, and to particularly the young pupils who no doubt would have been looking forward to Ashling’s presence in the classroom, teaching music or sport as well as the broader curriculum.

“I’ve always been of the view that a national schoolteacher, from the beginning of the State, has been the bedrock upon which our society was built.

“And, in many ways, Ashling Murphy represented and personified the very best of that tradition of national teaching.

“I think it has united the nation in solidarity and revulsion at what has happened.” 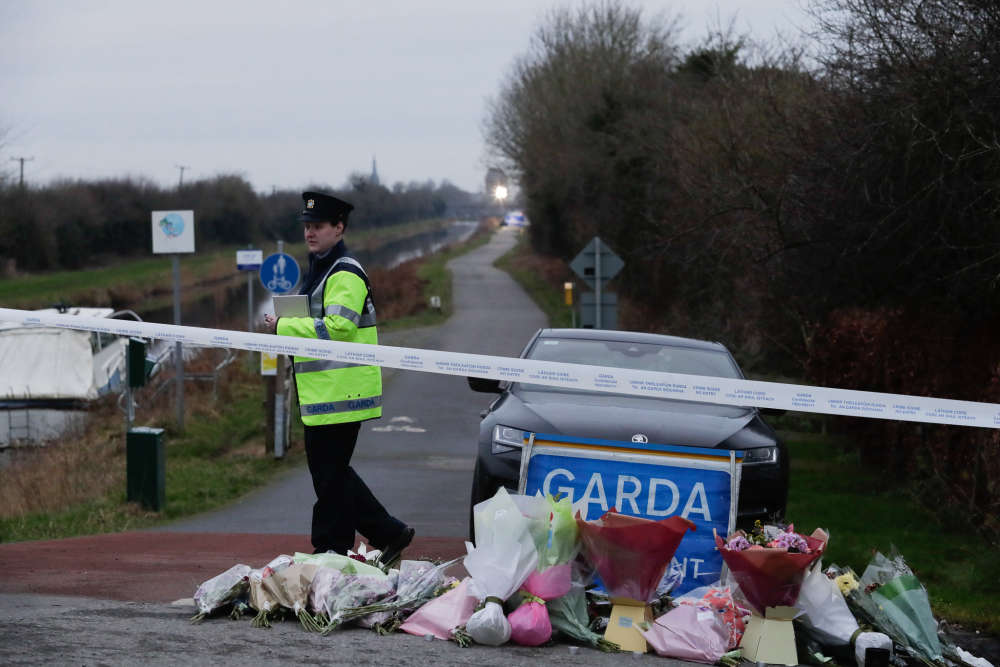 (A Garda on duty besides the floral tributes left near to the Grand Canal in Tullamore, County Offaly, where Aisling Murphy was found dead on Wednesday evening.)

He added: “No stone will be left unturned in terms of bringing this investigation to a completion and to bring the person responsible for this to justice.”

The Taoiseach said a new national strategy that is currently being developed to tackle sexual, domestic and gender-based violence in Ireland will adopt a “zero-tolerance” approach.

“There has to be a broad societal approach and realisation that there has to be zero tolerance for any sort of violence,” he said.

Mr Martin said he has spoken to the Murphy family.

“I just wanted, like everybody across the country, on behalf of the people to express our solidarity with them and our devastation. The fact that a beautiful young woman has been taken from their lives,” he said.

“I can say without hesitation that every effort will be made to bring this person to justice and to keep people safe in the intervening period.”

The death of Ms Murphy has sparked fresh debate about the safety of women in Ireland, with many asking how such an attack could happen in broad daylight.

Tanaiste Leo Varadkar said on Friday he was devastated by the murder. 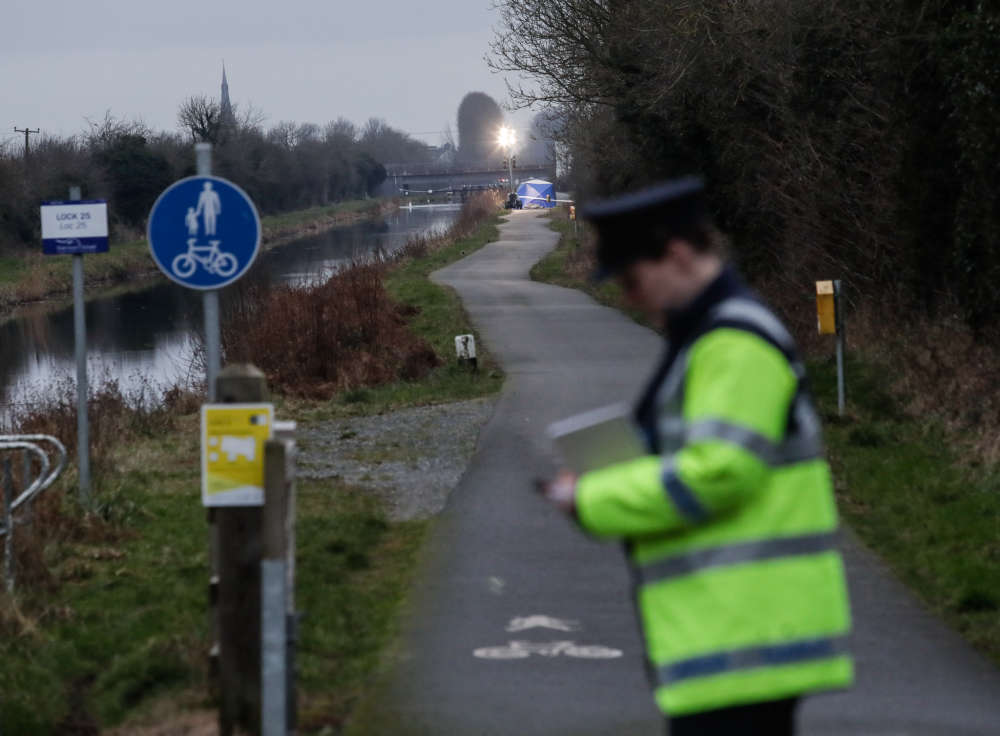 (A Garda takes notes beside the Grand Canal in Tullamore, County Offaly)

He said tackling gender-based violence had been a priority of the Irish Government for “quite some time”.

“But it can’t just be the Government,” he added, in a news conference in Co Kildare.

“We, as a society, need to face up to this. There is an epidemic of violence against women. It’s been going on for millennia, quite frankly.

“Men and boys, I think, in particular have a responsibility to start to have that conversation among ourselves about the kind of factors, the kind of attitudes, that give rise to feelings that engender men to commit acts of violence against women.

“I would hope that by shining a light on gender-based violence might help us to have this discussion in society and to improve things.

“But I’m conscious that, you know, it’s only a year since Sarah Everard was killed in the UK, it’s a year since a woman from Mongolia was killed by a 15-year-old boy, just going about her normal business in Dublin, so these things are just happening too frequently.

“We’ll do what we can as a government, we’ll continue that investment, but also I think, as a society, we have a responsibility as well, and particularly men and boys and teenagers.”

Mr Varadkar continued: “I know people in Tullamore must be very worried at the moment because the killer is still at large and I want to assure people that all of the resources of the gardai are going into making sure that this person is found.”

Earlier, Justice Minister Helen McEntee had promised that “every resource” would be provided to gardai in the investigation.

On Friday Ms McEntee tweeted: “Every resource will be provided to An Garda Siochana to find who murdered Ashling Murphy. It is vital that we all support the Gardai in their work.”

The murder has triggered widespread outpourings of grief and anger, with vigils planned in towns and cities across Ireland on Friday and over the coming days.

A vigil has been organised in Tullamore on Friday, with a book of condolence opened online.

Vigils will also take place in Belfast today at 4pm at Belfast City Hall, and in Derry/Londonderry at 4pm at the Guildhall steps.

Please join us tomorrow with flowers and candles 4pm @ Guildhall steps to remember Ashling Murphy, and to call, once again, for an end to violence towards women. Please wear face masks and maintain social distancing. #AshlingMurphy #OurStreets pic.twitter.com/wExs6smrzw

On Friday gardai issued a renewed appeal for witnesses and asked anyone with information about a bicycle – a Falcon Storm mountain bike with straight handlebars and distinctive yellow/green front forks – to come forward.

Every resource will be provided to An Garda Síochána to find who murdered Ashling Murphy. It is vital that we all support the Gardaí in their work. Please anyone with any information, particularly on this Falcon Storm mountain bike, come forward to Gardai. pic.twitter.com/a9Mb0Ojdnp

On Thursday officers released a man they had been questioning, saying he is “no longer a suspect”.

The man’s solicitor told the PA news agency that he has had his “life ruined”.

Donal Farrelly, who represented the man during his two days of questioning, condemned those who had tried to identify him on social media.

Mr Varadkar, asked about Mr Farrelly’s comments, said it would be a “serious” issue if any information on the man was leaked.

He said that any such allegations can be investigated by the gardai or the garda ombudsman.

The town of Tullamore is still reeling from the death of Ms Murphy, who was described as a “special girl” and a “little angel” by her family.

In an interview with the Irish Independent newspaper, her father Raymond said: “She was a great worker, with great drive. A marvellous musician.

“She crammed so much into her short life.”

Those who knew her described her as a gifted musician who was loved by her pupils.

Several hundred people attended a vigil in her memory in Galway on Thursday, many of them with flowers and candles.

Vigils have also been arranged in Dublin and Belfast, with the impact of the attack felt on both sides of the Irish border.

It is believed about 50 officers are working on the investigation and a post-mortem examination has been completed.

The route along the Grand Canal is often busy and is a popular spot for walkers and joggers.

Floral tributes were left outside the gates of Durrow National School, where Ms Murphy taught and on Friday, the school issued a fresh tribute to her.

In a statement posted on Twitter, the school said it was “utterly devastated by the passing of our dear colleague and friend”.

“Ashling was a very professional and talented young teacher. We are deeply saddened by her tragic loss. Our thoughts are also with her beloved family at this sad time.”

Principal James Hogan told RTE radio on Thursday that Ms Murphy was a “bright light who put a smile on anyone’s face”.

He added: “Ashling was a shining light to the kids and a very professional and talented young teacher.

“She was an inspiration to so many, not just in our school but across the wider community of schools.” 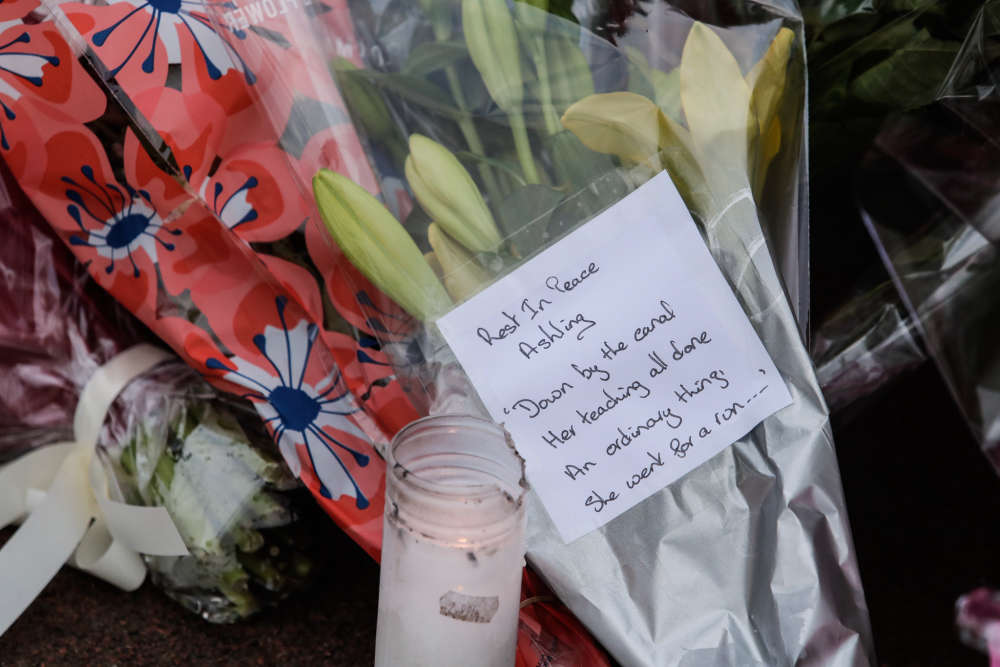