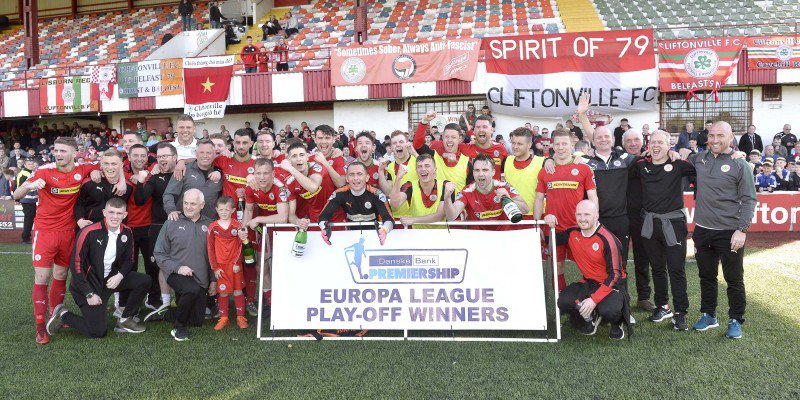 The Red Army is set to march into Europe. Pic: NIFL.

It earns them £200,000 from UEFA for making the first qualifying round.

Rory Donnelly shot the Reds into a 2-0 lead, but the Glens fought back to level it with Robbie McDaid scoring before Curtis Allen equalised from the penalty spot after McDaid was fouled.

However, Joe Gormley grabbed a late winner for the home side.

Manager Barry Gray praised his players for bouncing back yesterday after losing the Irish Cup final the previous Saturday....

Glens captain Marcus Kane says it was a cruel way to miss out...

Glentoran are set to appoint a new manager.

In the wake of the controversy over playing the national anthem at the Irish Cup final, he told us he's considering his position as a member of the Irish FA board...

.@cliftonvillefc @GerardLawlorCFC delighted with play-off win but not holding back on "shambolic" treatment of club pic.twitter.com/Na5UkPaEL1

Several players are set to leave Linfield, with most of them being released.

Midfielder Stephen Lowry has told the club he doesn't want a new contract and could rejoin former team Coleraine.

The Bannsiders have been busy re-signing a couple of their star players...

#ColeraineFC is pleased to announce that Josh Carson and Aaron Traynor have both agreed new three-year deals with the club.,.. #COTBhttps://t.co/bbpIa9D2I4 pic.twitter.com/RREXMmQEEI