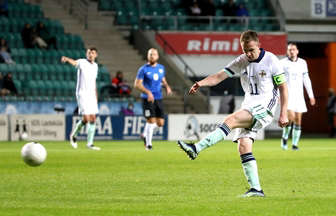 Northern Ireland prepared for their World Cup qualifier against Switzerland this week with a solid 1-0 victory over Estonia in a low-key friendly in Tallinn this evening.

The highlight of the game was easily the winning goal scored by substitute Shane Ferguson, who hammered the ball into the top corner from 30 yards.

Ferguson, earning his 50th cap for his country, had been touch and go to play after nursing a foot injury in recent days.

However, there was no inkling of that when he blasted the ball home:

🎥 If you missed the sensational strike from @shane_fergie that gave Northern Ireland a 1-0 win in this evening's friendly in Estonia, here's a replay👇courtesy of Sky Sports...#GAWA pic.twitter.com/XDa0M89Bue

Northern Ireland boss Ian Baraclough promised to ring the changes in his team following the 4-1 success against Lithuania in a World Cup qualifier on Thursday – and he made nine changes in all for the game at the A Le Coq Arena in the Estonian capital.

Paddy McNair, who is suspended for Wednesday’s World Cup qualifier against Switzerland, retained his place, as did Jamal Lewis.

Estonia, who face Wales in a World Cup qualifier in Cardiff on Wednesday, launched a couple of crosses into the area early on, but they were easily dealt with. They also had a penalty claim turned down.

Niall McGinn, who captained his country for a second time as he earned his 67th cap, conjured up a decent delivery into the danger zone on 15 minutes but there was no-one to meet it.

Tom Flanagan produced a surging run into the area but his cross was cleared by the Estonian defence and then Gavin Whyte tried to find Kyle Lafferty in the box but the ball was put out for a corner.

Alfie McCalmont, who looked confident and assured throughout the game, found space down the right and teed up Lafferty, but his shot was blocked and the ball was collected comfortably by Estonia keeper Matvei Igonen, who was on his toes again a few minutes later to hold a looping McCalmont cross.

The best chance of the half saw Estonian midfielder Vlasiy Sinyavisky let fly from 20 yards and Northern Ireland keeper Trevor Carson watched the ball all the way as the stinging drive sailed about a foot past his left hand post.

Just before the break veteran Estonian midfielder and captain Konstantin Vassiljev was shown a yellow card for chopping down Jordan Jones as he threatened to break clear of the home defence.

Estonia created a couple of decent chances after the restart. Erik Sorga, who came off the bench to score against Belgium as they defeated Estonia 5-2 in a World Cup qualifier in Tallinn last week, steered an effort wide from close range.

On 54 minutes McGinn handed the captain’s armband to Ferguson as he came off the bench to reach the 50-cap milestone.

Six minutes later Carson got down well to keep out another Sorga effort before the keeper made way for Conor Hazard, while Estonia substitute Henri Anier scuffed a shot wide. 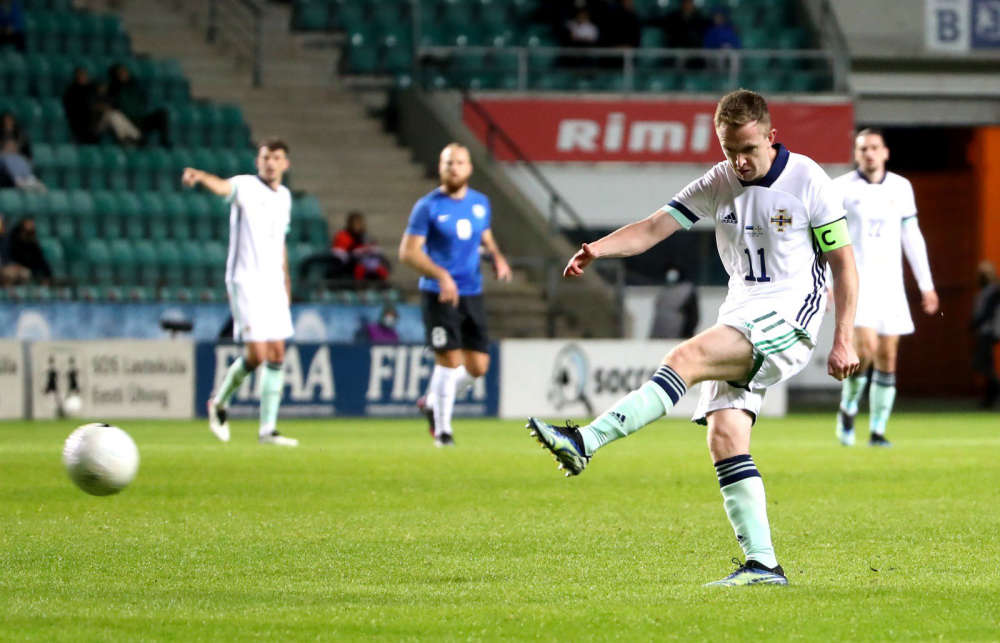 Jones put a header well wide of the target prior to Ferguson’s rocket on 75 minutes which turned out to be the winning goal. Igonen touched the wing-back’s blaster slightly as it flew towards the top corner, but he was never going to stop it as it hit the back of the net via the inside of the post.

On 83 minutes Ferguson drifted forward once again to unleash another long range strike, however this time it went over the top.

In the closing stages Estonia piled forward and midfielder Markus Poom fired a powerful shot just inches over the bar, however Northern Ireland hung on comfortably to register the victory.