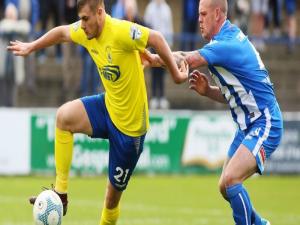 Leaders Coleraine go to Dungannon, while second-placed Cliftonville are also in Mid-Ulster, taking on Glenavon.

The tough Premiership encounters will seem relentless for Swifts’ manager Kris Lindsay as he welcomes Coleraine to Stangmore Park. Dungannon suffered another heavy defeat last Saturday to Cliftonville. It has been a dismal month of October for the Tyrone outfit, losing all five competitive games in all competitions – they remain in eighth place but will know they will need to start picking up points again to avoid getting dragged into a potential relegation battle.

By comparison Coleraine just keep moving forward with confidence. Their huge win over Linfield on Saturday continued to add serious credibility to their title charge and they survived the threat of a potential cup shock in midweek, by comfortably dispatching Championship side Dundela at Wilgar Park to earn a place in the semi-finals of the League Cup next month.

Gary Hamilton halted his team’s worrying five game losing streak with a draw on Saturday evening against Crusaders. The manager even made a starting appearance as the Lurgan Blues conceded a stoppage time equaliser to deny them all three points. Glenavon must start picking up points to move away from tenth place in the table but continue to struggle with a lengthy injury list that could hamper their progress this season.

Another big win for Cliftonville last Saturday keeps the Reds well in the title mix – the 5-0 demolition of Dungannon Swifts keeps Paddy McLaughlin’s men in second place and within a single point of leaders Coleraine. McLaughlin has curated the meanest defence in the league with only eight goals conceded which has been key to the North Belfast club’s success this term. Joe Gormley was on hand to score twice in the earlier meeting between the side in August, as Cliftonville ran out 3-1 winners.

Three consecutive defeats across all competitions have left David Jeffrey’s side in vital need of three points to reignite their faltering season. Ballymena United followed up their disappointing defeat last weekend to Glentoran with a spirited, yet unsuccessful, League Cup quarter-final tie with Crusaders – losing in extra time. It was a double blow for the Braidmen who had been boosted by the return of talisman forward Adam Lecky but following his red card, will now sit out the next three games starting on Saturday.

Larne make the trip over Shane’s Hill for this local derby clash at the Showgrounds, the Invermen start the weekend level on points with their opponents – but are without a league win in their last three games. Tiernan Lynch’s men played out a 1-1 stalemate with Institute at Inver Park last weekend and currently start the gameweek in sixth place, but will be keen to make amends for their 4-2 defeat to the Sky Blues at Inver Park in August.

A third league defeat of the season for David Healy’s Linfield on Saturday against Coleraine will have been a blow to their title aspirations but with two games still in hand on their rivals and a five point gap to make up, no-one at Linfield will be panicking just yet. The Blues bounced back from the Coleraine reverse to progress to the semi-finals of the League Cup by virtue of a narrow 1-0 win over Cliftonville as they continue the defence of the BetMcLean League Cup.

These two sides have already met in front of the Sky Sports cameras this season, with Linfield coming out as 3-0 winners at the Belfast Loughshore Hotel Arena. Niall Currie’s men may go into this game again in hope rather than expectation but comforted by a solid return to the Danske Bank Premiership this season, as their important 1-0 win over relegation rivals Warrenpoint Town last Saturday moves the East Antrim club into ninth place in the table – and only four points away from the top six!

Barry Gray returns to Milltown for the first time since his re-appointment as manager of Warrenpoint Town. Gray didn’t get off to the start he would have wanted last weekend, losing 1-0 to Carrick Rangers in a result that keeps the County Down side rooted to the bottom of the Danske Bank Premiership table. Still only three points separates Warrenpoint from their nearest rivals – Institute.

Glentoran produced a superb second half display last weekend to win 3-1 against Ballymena United at the Oval. That result keeps Mick McDermott’s men in fifth place in the table going into the trip to Milltown. It took a last minute Patrick McClean winner from Glentoran to separate these two sides in the last meeting in September, as Glentoran won 2-1 at home.

Both these sides go into the Seaview meeting off the back of League Cup quarter-final victories in midweek. It took the Crues 119 minutes to overcome Ballymena United at the Showgrounds on Tuesday, but the win on Tuesday was a welcome boost for Stephen Baxter as it became their first win in five attempts across all competitions. Getting the Premiership campaign back on track will be the aim on Saturday after losing top spot in recent weeks, the North Belfast side currently occupy third position, two points behind the leaders Coleraine. Rory Hale is suspended for this game after his straight red card against Ballymena.

‘Stute may currently still find themselves in the relegation places but there is renewed optimism around the Maiden City club after earning a place in the semi-finals of the League Cup and improved league form which has seen one defeat in the last four games – following the draw against Larne at Inver Park on Saturday past. Points on the board are now required for Sean Connor to move his side away from the foot of the table, they are currently five points behind next placed Glenavon – they will be without Caoimhin Bonner through injury.

But raise a glass to @JoeGormley9 9-minute hat-trick for Reds brings his goal tally to 201 in 301 games.