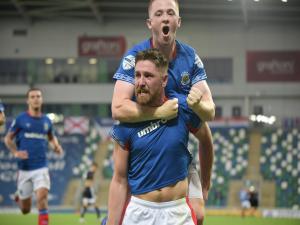 Back to the Blues...Lavery and Stafford. Pic: Linfield FC.

Northern Ireland striker Shayne Lavery is staying with Linfield for another season.

The 21-year-old joined the Blues last summer after a spell with Everton.

He's signed a one-year contract extension along with another attacker, Daniel Kearns, and defender Mark Stafford.

Defending champions Linfield were four points clear of Coleraine with seven games remaining when the season was suspended in March due to Covid-19.

A recommendation on the campaign being finished or cancelled is due to be made by the Northern Ireland Football League's Covid-19 Steering Group at the end of June.

The Irish FA has granted NIFL an extension of the current season until 31 July.

Roy Coyle has been presented with the 2020 Dr Malcolm Brodie Lifetime Achievement Award.