Teams vie for a place in Tennent's Irish Cup quarter-finals 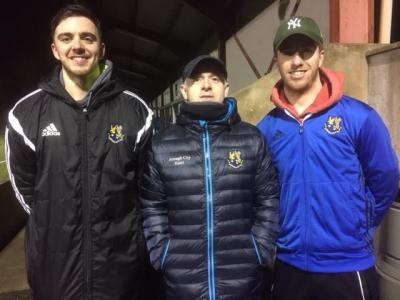 Armagh City hope to oust the holders, Glenavon, in a local derby showdown at Holm Park.

City have been struggling in the Championship, but manager Marty Rice is optimistic about their chances of an upset against the Lurgan Blues.

Among the other key players are full-back Dale Montgomery and striker Conor Mullen.

They're relishing the prospect of taking on the cup champions, including their new Brazilian signing, Renato.

Conor coming up, after Dale who reckons their 4G pitch will be a big advantage.

Also on Saturday, Linfield are off to Drumahoe to face Institute, who are currently sitting third in the Championship.

Blues defender Mark Haughey says it won't be easy at the Riverside Stadium.

Elsewhere, Crusaders host the PSNI, the team they beat 4-2 in November in the semi-final of the Toals County Antrim Shield.

Dungannon Swifts go up against Mid-Ulster Intermediate side Dollingstown at Stangmore Park.

Next up for the Swifts is an Irish Cup 6th Round Tie with @dollingstownfc next Saturday 4th February. KO 3pm at Stangmore Park.

Portadown manager Niall Currie takes his team the short distance to the club he used to manage in the Championship, Loughgall.

Coleraine have home advantage against Tobermore United, from the third tier of the Irish League, the Premier Intermediate division.

Make sure to put this date in your calendar!!! pic.twitter.com/fpZ29pYRmt

The lowest ranked team left in the competition, Crewe United of the Mid-Ulster Intermediate League, will travel to Championship leaders, Warrenpoint Town.

Crewe ready to make Irish Cup History as they take on Warrenpoint Town in the last 16 of competition this... https://t.co/CjUGeJ30uB

Harland and Wolff Welders will attempt to repeat their heroics against Glenavon of two years ago when they entertain Ballymena United.

The game at Tillysburn Park has an earlier kick-off time of 1.30pm - the rest of the matches start at 3pm. All are played to a finish with extra-time and penalties if needed.