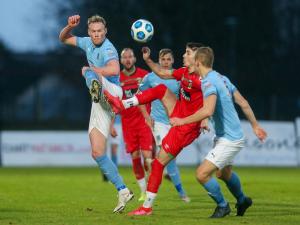 Irish League off for a fortnight

The Danske Bank Premiership has been suspended for a fortnight due to the surge in coronavirus cases.

Testing will be provided for players, officials and staff before the action resumes.

The two-week break started at 6pm on Saturday.

There was a dramatic finish in the only Danske Bank Premiership match on Saturday afternoon.

Cliftonville looked set to claim victory in the north Belfast derby at Solitude,

but a last-minute goal from Ben Kennedy gave Crusaders a 2-2 draw.

The other two scheduled fixtures were postponed because of frozen pitches.

And here's how they stand going into the two-week #COVID19 break in the #DanskeBankPrem pic.twitter.com/RBxgcvpWUi

It looks like a former Portadown and Glentoran star is back to his best:

Sport on air on the hour pic.twitter.com/4vrx5X4LAR

Ulster's unbeaten run in the PRO14 came to an end as they were beaten 24-12 by inter-pro rivals Leinster at the RDS in Dublin on Friday night.

The hosts scored four tries to earn a bonus point win and cut Ulster's lead in Conference A to five points, with Leinster having two games in hand.

John Cooney kicked all the points for Dan McFarland's men but their 10-game winning run in the league is over.