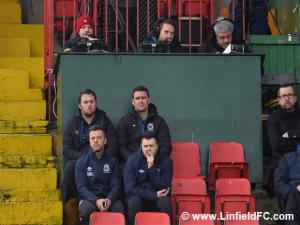 The Ports' equaliser was scored by Marcio Soares who was released by the Crues last month and re-joined his home town team.

Meanwhile, the Blues have closed the gap on Crusaders to seven points thanks to a 1-0 win away to old rivals Glentoran yesterday.

Andy Waterworth hit the winner against his former club.

It finishes 1++0 to Linfield at the Oval thanks to that Andy Waterworth goal.

In the other games yesterday; three players were sent-off in a scoreless draw between Cliftonville and Coleraine.

Dungannon Swifts and Ards drew 3-3 while Ballymena had a 2-1 victory at Ballinamallard.