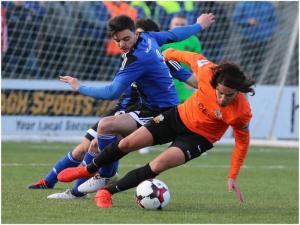 There's a crunch match on Saturday in the battle for the Danske Bank Premiership top six.

With just six games until the split, sixth-placed Glenavon are away to the team two places and six points behind them, Glentoran.

Recent recruit Renato could make another appearance for the Lurgan side.

The 27-year-old Brazilian says he's gradually finding his fitness after making the move from Danish football.


It's not quite the weather he's used to back in Brazil, but Renato says he's received a warm welcome after the unlikely link-up with Gary Hamilton's men...

It's back to league action this weekend for Toals County Antrim Shield winners Linfield.

The second-placed Blues are away to Carrick, who sit second from bottom.

But is he worried about facing a rampant Linfield?

The Crues beat David Jeffrey's team 6-0 in north Belfast on the opening day of the season, but then lost against the Sky Blues at Warden Street.

Manager of the month for January, Oran Kearney, will aim for a sixth league win in a row when Coleraine entertain Dungannon.

Can Coleraine make it eight wins in a row?

2 days to go...Massive game this Saturday! Get yourself along and get behind the Ports 🔴⚪ pic.twitter.com/YWGbUX9CSG

The Ports beat them at home earlier this season, ironically when new Shamrock Park boss Niall Currie was in charge of the North Down side.

The win didn't count in the end as the basement club had to forfeit the points for playing midfielder Robert Garrett while suspended.

All the games kick-off at three o'clock.