Second half six hit at Windsor, Waterworth with four and Blues go four clear at top 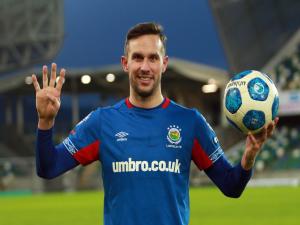 The Danske Bank Premiership returned on Saturday after a two-week suspension.

It followed a successful first round of Covid-19 testing at all the clubs.

The games continue to be played behind closed doors.

The programme was hit by the weather.

Ballymena against Cliftonville, Carrick at home to Portadown and Glenavon against Glentoran were called off after pitch inspections.

Linfield took a while to warm up, but eventually hit six goals in the second half against Warrenpoint with Andy Waterworth getting four.

Coleraine had a 2-0 home win over Dungannon Swifts.

What a game earlier on the Shore Road:

A star striker had been ruled out of the resumption:

The #DanskeBankPrem resumes tomorrow after a two-week break, but a star striker will be missing.

Cliftonville have just confirmed Joe Gormley sustained a broken elbow in training at Solitude last night & the 31yo faces a long spell out.

Get well soon Joe the Goal.