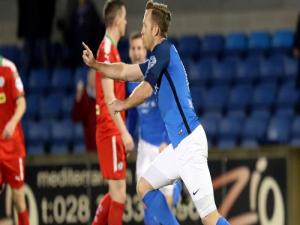 It was the late, late, late show in the Danske Bank Premiership on Saturday with crucial stoppage time goals in three of the five fixtures - for Crusaders, Glentoran and Glenavon.

It was a special strike at Mourneview Park for the former Northern Ireland midfielder as he did it on his 34th birthday...


Sammy says it made amends for his part in Joe Gormley's opening goal for the Reds...


The third versus fifth clash was a feisty affair and Reds boss Barry Gray was keen to defend his players after the game....

The 25-year-old is set to leave Windsor Park after being told his contract won't be renewed at the end of the season.

We asked former Warrenpoint manager Gray if a deal can be done before the end of the January transfer window?

The Crues stay a point ahead of Coleraine who had a 1-0 win away to Dungannon thanks to a second-half strike from substitute Eoin Bradley.

The top two meet at the Showgrounds next Saturday.

Glentoran needed a stoppage time free-kick from James Knowles to get a 2-2 draw at Ballinamallard.

Sky Blues goalkeeper Conor Brennan is returning to Scotland after being offered a full-time contract with Greenock Morton.

Linfield's scheduled match against Warrenpoint Town was postponed due to a waterlogged pitch at the Q Radio Arena.

The Blues were unhappy about the circumstances with club chairman Roy McGivern taking to social media to make his feelings known.

He tweeted: "Almost 1.30 and still no news if game at @thepointfc is on or off. Serious questions need answered at @OfficialNIFL about this fiasco...

"Just heard that game is OFF. It's been clear from early morning that the pitch was unplayable but no one there to make a decision."

Warrenpoint had requested an inspection on Saturday morning, saying the pitch was not playable due to torrential overnight rain.