Plans for link between Scotland and Northern Ireland scrapped – reports 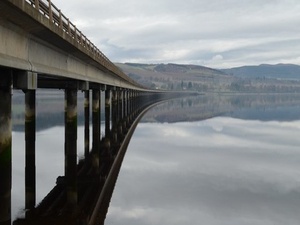 Plans to build a tunnel or bridge between Scotland and Northern Ireland have been scrapped, according to reports.

The Financial Times reported on Tuesday that the idea is one pledge which would not be fulfilled as the Treasury looks to stick to self-imposed spending limits in next month’s Budget.

A Government official told the paper the link – proposed between Portpatrick and Larne – was “dead – at least for now”.

The Prime Minister had previously been supportive of the link.

The plans were derided in Scotland, with Transport Secretary Michael Matheson saying it could cost as much as £33 billion.

Other estimates put the cost closer to £15 billion, which would still account for a major chunk of spending as the UK comes out of the other side of the pandemic.

The UK Government appeared serious about the link, commissioning a union connectivity review which would, in part, assess its feasibility and cost.

A spokeswoman for the UK Government did not deny that the plans had been shelved, but said: “Boosting connectivity across the UK and improving transport infrastructure are at the heart of our levelling up agenda.

“That is why we asked Sir Peter Hendy to lead a Union Connectivity Review to look at future transport priorities, based on the wider strategic case for investment and the benefit it will bring to people and businesses across the UK.

“On the back of his interim report in March, we have committed £20m to develop plans that can assess options on road and rail schemes.

“We’re now looking forward to his final recommendations ahead of the spending review, where we will consider and confirm funding plans for delivering improved connectivity between all parts of the UK.”

But Nicola Sturgeon dismissed the idea, urging the Chancellor to instead send the funding to the devolved administrations to help deal with domestic issues.

In March last year, Ms Sturgeon said: “If you’ve got £20 billion available to build a bridge, I’m pretty sure me and I’m sure equally the First Minister of Northern Ireland would be able to find things to spend that on right now that actually would be really useful to accelerate the progress to net-zero.”

Scottish Secretary Alister Jack has previously said his preference would be for a tunnel as opposed to a bridge, telling journalists last year: “But I think the best solution if we’re going to bridge Scotland with Northern Ireland is a tunnel, and I’ve had conversations along those lines with the Prime Minister.”